Step 1: crisp up the Jambon de Bayonne (bacon or prosciutto work, too)
In a frying pan, add a pat of French butter and cook the Bayonne ham over medium heat until crispy. Cool, dice and set aside.

Step 2: make the cheese sauce
In a large saucepan, melt 4 tablespoons of butter over medium heat. Whisk in the flour. Reduce the heat to medium-low and cook for 1 minute, stirring to avoid burning. Slowly whisk in milk. Add in grated Comte and cubes of Camembert and stir until fully melted. Add cayenne.

Step 3: boil the macaroni
Cook 1 pound of pasta in salted boiling water and cook to al dente (i.e. still firm when bitten). Reserve the warm pasta water to use later as a thinner if the cheese sauce becomes too thick. Preheat oven to 350ºF.

Step 4: make the French baguette breadcrumbs
In a skillet, melt 3 tablespoons of butter over medium-low heat. Add the garlic and baguette bits and stir. Toast the crumbs until browned, stirring frequently to avoid burning. Remove the pan from the heat and when cool, transfer to a food processor and pulse into crumbs.

Step 5: Combine and bake to perfection
In a large mixing bowl, combine the pasta with the cheese sauce and add in ¼ tsp cayenne pepper and 2 cups milk. Sprinkle in crispy ham and stir. Add a little salt and pepper to taste and pour mixture into a large (9 x 13-inch) baking dish brushed or sprayed with oil. Top with breadcrumbs and bake at 350ºF for 20-25 minutes or until breadcrumbs are golden brown. Strip a little thyme from stems and sprinkle over top before serving. 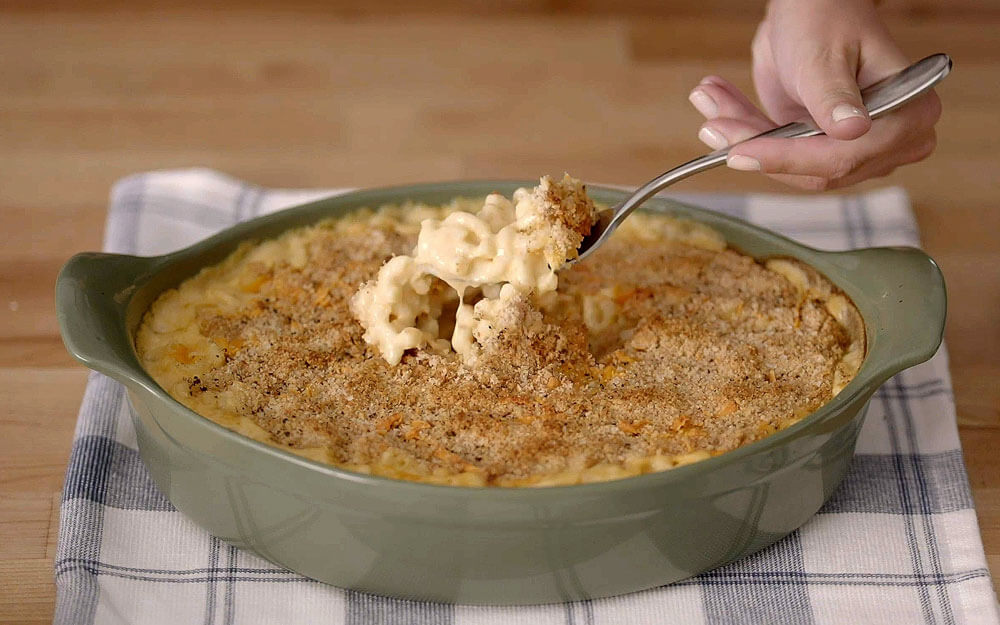